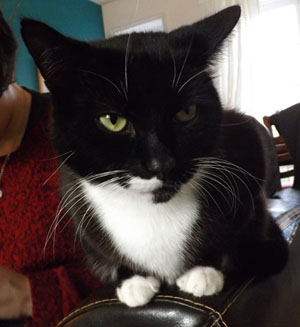 Hi fellow cat lovers! This is my first blog post for the new Think Cats Blog, in which I’ll be updating you all on call things cat related that are going on around me. A lot of the time I’ll be mentioning home – I’m currently studying 300 miles away, so “Home” is where my cat is, but sadly not, always, where I am (to avoid any confusion!). I also have two cats and they don’t live in the same house, (more potential confusion…). This first post is all about Harry, who lives with my mum at Home. The second cat, Ziggy, who I’m sure to mention, lives with my dad, which for ease I’ll call Home #2. Disclaimers over, let’s get onto the blog!

After adopting us seven Christmases ago, it came as no surprise that our cat Harry was a wanderer; he frequents at least one other kitchen that we know of, but we suspect this is merely the tip of the extensive cat-food-chain iceberg which he and many humans are a part of. In his tuxedo, with his demanding meow and charming swagger, there is no doubt that he knows his way into the kitchens with the best food for miles around.

An unexpected sighting got us thinking about how far Harry got on his travels. When driving well out of our neighbourhood, we were given a glimpse into the possible scale of his kitty operations when we saw him sitting by a bus stop, as if waiting to hop on. We couldn’t believe it, and almost stopped the car – what was he doing this far out? Cat owners, even of the most promiscuous cats, all crave the monogamous attention of their pet. It felt like we had caught him doing something secret and shifty, and my mother wished she’d never seen him, preferring ignorance over the possibility that someone else was loving our precious cat. I’ve come to accept that Harry goes where he wants, and as much as we like to think we keep him, he in truth keeps us. So after denial, anger, and bargaining (more treats, more food, more cuddles) came for me, acceptance, and most importantly, interest. When he’s not sleeping (most of the time) or on someone’s lap (a lot of the time) when did he fit in these sojourns?

The BBC documentary The Secret Life of the Cat, aired in May last year (see link below for clips if you didn’t catch it!) added fuel to our curiosity surrounding Harry and his nomadic lifestyle. The myriad of tracks and journeys made by the cats of Shamley Green, Surrey captured our imaginations: and revealed some truths we didn’t want to face up to. Our cats were not our precious babies – well they were, when no other cats were watching, but they were also socialites, guardians, patrollers, killers, stalkers, burglars, and much more. Some cats spent their waking hours in the humble parameters of their own gardens, occasionally crossing other cats on their territorial walks. The biggest surprises were those who travelled in long circuits, their territories spanning miles. All of a sudden, everything made sense: Harry was obviously one of those cats.

So as a silly birthday present (yes, we get presents for our cats, don’t tell me you don’t too!) we got Harry a small Cat Camera, which takes pictures at random intervals, attached to a cats collar, in order to see where they go. Although not nearly as sophisticated as the BBC documentary, who used miniature lion GPS collars and specially developed catcams, I’m convinced the answer to the scale of his wanderings (and the constant fleas) lies in the grainy pictures of that tiny camera, as yet unused and lying in our cupboard. That is if he doesn’t shake it off, like every other collar we’ve attempted to give him.

This weekend I’m visiting Harry at home, and I think it’s time for his close up…
Until next time, where I hopefully detail the progress of our mini Secret Life of the Cat project!

This is a promoted forum post from our Cat Blogs section by ThinkCatsEm! Maybe you have something to say about your cat!?

comments powered by Disqus
«««  WE ♥ SOCIAL MEDIA  »»»
Follow us for news, updates, and silly stuff: